It seems impossible to criticize design without seeming like you are nitpicking. Obviously the entire issue of design is one of small nitpicks that pile up – for every small decision made, especially in a computer system, someone said “Well, this should behave in this way”. Good design guides these small choices. Bad design might “ship the org chart”, or more commonly, fail to provide any guidance at all.

Let’s talk about the Xbox360, and the PS3. They’re both pretty mature at this point, they can handle it. I’m leaving the Wii off these discussions since its iPhone interface is pretty boring to me – it’s well executed, simple, and neither flawed nor innovative in any instructive way.

The scenario in our apartment is “no autologin” since the gf and I share both consoles, so let’s look at the just-turned-on experience (sorry for the dubious quality photos): 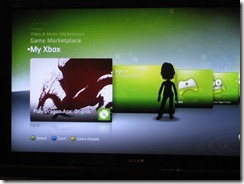 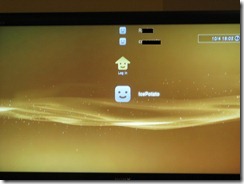 Both screens are trying to solve the same problems: Trophies/achievements, online stores, and friends lists require a user to be logged in even for playing a game. The PS3 chooses not to show you what capabilities it has until you login, where the Xbox shows you what’s possible, what game is in the tray, and defers forcing logon until the user actively chooses to do something.

You can also see some of the basic design aesthetics at work: Sony is no-frills. Xbox is colorful and uses a whole bunch of visual tricks to give you an intuitive look at what elements are movable – the faded type, the use of depth to stack tiles in the background, and always the legend at the bottom to tell you exactly what buttons do what. See that at the bottom of the PS3’s screen? Of course not. Sony expects you to know “X” means “accept” and “O” means “cancel”. 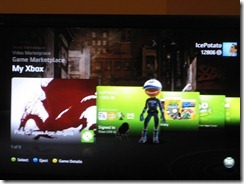 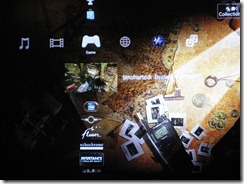 This is a fairer picture of  Sony’s interface. Aside from the use of vertical and horizontal space, there are gorgeous custom overlays for every game - when you’re on the game “blade”.  The game icon is also animated to give you a few action shots. The interface for Xbox doesn’t change too much when you login – it’s consistent with the logged-out experience. Game icons can’t be animated on the Xbox, and custom themes are generally something you have to purchase. However, there are a few gripes I want to share about the PS3 screen:

Still, despite these gripes  - at first glance, the two interfaces don’t look that different. How many ways can you make an navigation pane? There’s a horizontal element, and a vertical element. When I said the PS3 was “no-frills”, though, I wasn’t kidding. Its dominant metaphor is pretty clear: 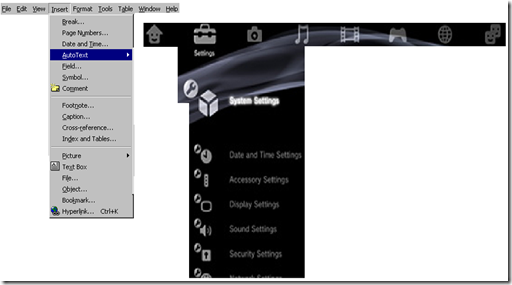 By the numbers: 10 icons when the PlayStation is online (The PSN icon is not shown when the console is offline, as above; Xbox has 9 blades, with 1 being quite simple to disable). Sixteen menu options under “settings”. My particular PS3 has thirteen menu options under “games” (Xbox has 9…ish under “My Xbox”, which is the biggest category).  And of those sixteen menu settings, all of them are hiding 5-6 individual settings beneath that single category. So the PS3 interface is hitting the same problems as the old Office interface.

Here’s the 360 settings screen in comparison: 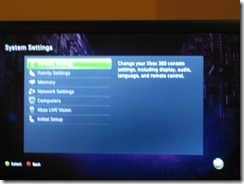 Okay, still a ton of options hidden in these menus. But there’s text stating exactly what settings are contained within, which I think the PS3 needs pretty badly after I spent too much time hunting for specific options.  And the settings are organized in much more concise categories. 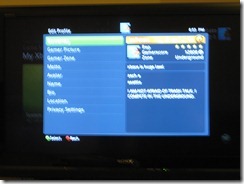 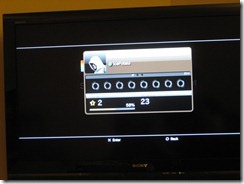 Yeah, good luck trying to figure out what you’re editing in the PS3 screen. And look – my achievement icons are fucking loading. And every time you enter this screen, you have to sit through a progress bar as “trophies are syncing”.  Don’t bother trying to figure out what exact trophies you have from this screen, or how you got them– you need to exit out completely and go back to the Games menu and find “Trophies” sandwiched in between the twelve other icons.  Absolutely terrible interface here on the PS3’s part, while Xbox is concise. Also, speaking of trophies: 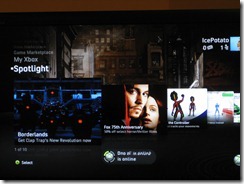 See that little toast? If I hit the center jewel on my controller (it looks exactly like the icon on the toast!) , it pulls up my friends screen to show me who just logged on! If I hit it when an achievement pops, it shows me the achievement I just popped! If I hit it normally, it pauses the game I’m playing and brings up  an extremely compressed interface that gives me a very efficient overview of what things I can do: 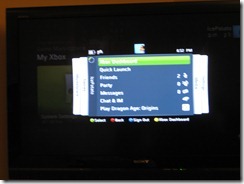 Here’s the PS3’s “jewel screen” when a trophy pops, a friend logs on, or whatever else is going on: 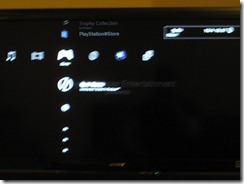 As with a lot of my other criticisms of the PS3 – it’s not really a flaw in the interface. Showing the same menu screen is consistent(although this triggers the god-damn loading icons). It’s just the Xbox experience seems really well thought out: “When a user sees a new achievement, they will probably want to know what it’s for”, “When a friend logs on, the user might want to interact with their friend” , “When the user is in the middle of a game, they might want a compact, lightweight interface”. In contrast, the PS3 interface doesn’t really seem “designed” as much as “plopped down into place” – when apologists say it has a “functional design”, they mean “it has some functions and it shows you what those functions are”.