This essay discusses the full plot of Genesis Noir, including elements of the ending. I encourage you to read it even if you haven't played the game.

I enjoyed Genesis Noir. I also struggled with two parts of it. It's a noir game containing femme fatales, down on their luck schlubs. It's also a jazz game - the "Improvisation" chapter features jazz solos, but the text and story also feels free-form. There's a structure, but there's also a lot left up to interpretation. The noir sections dead-ended for me in some pretty straightforward misogyny. The free-form nature of the plot left me a bit confused.

Genesis Noir's invocation of the femme fatale, Miss Mass, is a singer with an apparent alcohol problem and a bad marriage. She invites a plastered No-Man, already besotted by her lounge singing act, for a sexy rendezvous, and that sets into motion a jealous husband. The husband shoots Miss Mass, and No-Man... I can't explain this part, revisits the Big Bang through the heat death of the Universe to save her? We'll come back to that.

Miss Mass is absolutely a femme fatale. No-Man finds a prehistoric Venus figurine, it reminds him of Miss Mass. She's Woman Incarnate, all curves, etc etc etc. Miss Mass draws No-Man into trouble. Miss Mass is little more than the femme fatale stereotype. However, that's not the thing that's got me all het up.

During the Hunt chapter, a woman kills a stag you are silently communing with. The piece of horn you retrieve from its corpse is labelled - "Fatally sought after - feminine hands wished to possess it". 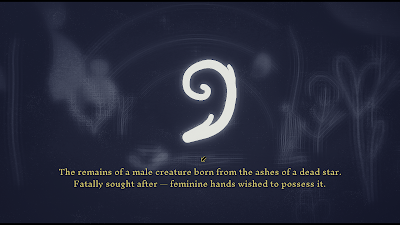 This is what infuriated me. This is Original Sin, Eve caused the downfall of Man, Grade A level bullshit. You can draw a direct line from this to the Femme Fatale device - No-Man is innocent until he sought Miss Mass. The innocent stag is slaughtered by the greedy Female. This, very conveniently, strips both No-Man's agency as well as the agency of Miss Mass' husband, Golden Boy who fires the gun which triggers this whole thing! Golden Boy is winking at you from within almost every chapter, his profile greets you at the end of each  chapter. Miss Mass is only seen in memories or in posters after the game starts. You can catch a glimpse of her in the Chapter Select screen as she sits, helpless to her inevitable fate. She is the axis of this whole thing, and she is barely spared a glance. All you need to know about her is her curves. She is Feminine.

I don't think noir needs to be inherently misogynistic, and maybe that's naive of me. Miss Mass is barely visible in the story and I don't think that's the only way to tell this story. I definitely don't think "Fatally sought after (because) feminine hands wished to possess" needed to be a theme, let alone a specific line in this game.

So onto the other part, the whole "revisiting the big bang" thing. Each chapter opens with a quick paragraph about cosmological history which sets the scene for the chapter, which then relates back to the plot of No-Man, Miss Mass and Golden Boy. Mostly. For example, the first chapter is "Seeding". It opens discussing the state of the universe pre-Big Bang, how the surface began to wrinkle before expanding outward to create the universe as we know it, and in the chapter you plant seeds in the wrinkles of the earth as the characters are lightly introduced. So there is a cosmological metaphor: the beginning wrinkles of the mass of pre-expansion matter concentrated in the Universe. The cosmological metaphor is linked to the gameplay metaphor: planting seeds as "wrinkles" to expand the paths you can travel, expanding the area you can travel to. Both are linked to the narrative: the beginnings of the characters before they explode into the action at the climax of the gunshot Golden Boy fires at Miss Mass. That's a complex and interesting balancing act to tie the cosmological metaphor to the gameplay to the plot. I have a lot of respect for this attempt and it's why I enjoyed the game so much even as the misogyny gives me pause.

The gunshot Golden Boy fires is itself represented as a star-filled field (which is also the chapter select screen), and the plan No-Man forms to save Miss Mass is represented as creating a black hole to redirect the bullet away from her. As No-Man moves through the game, he maybe creates a black hole on Mars? And then is confronted with, like... A being of pure energy, who is also a representation of some of the people he met along the way. Maybe. This is where that delicate balance of the cosmological metaphor tying itself to the gameplay tying itself to the plot starts to fray for me. I'm simply not sure how literally to read some of this.

The soundtrack to Genesis Noir is jazz. I love jazz. Part of jazz is ignoring traditional structural constraints, such as the act of improvisation - not going off of what is printed on the sheet, but inventing new structures according to a new and different set of rules. One jazz movement that stretched the boundaries of traditional constraints was called astral jazz . Therefore I do think it's a mistake to take a very strict literalist approach to the text of Genesis Noir and say for example "No-Man is a literal God who fell in love with a mortal woman, and this is the story of his attempt to save her by recreating the Universe". That seems to go against the text about the Constant, which is defined as mostly a feeling, which feels different for different people. It goes against the ethos of astral jazz, trying to box something freeform into a more familiar structure.

There's some degree of literalism the game wants to reach for. Genesis Noir is reaching for a coherent link between a cosmological metaphor, gameplay and plot. That link fell apart for me by the end of the game. Other parts, like a watch that I think No-Man sold to Miss Mass which she gave to Golden Boy, I simply failed to follow in the cutscene.

If we try to read it more metaphorically, I'm still not confident it all holds up. Let's grant that Miss Mass is metaphorically mass, just because of her name. Golden Boy could be energy, both because of his name and I guess his role in setting life in motion in Reflections. No-Man is time for his jaunt through the history of the universe and the watches he carries. That transforms the story into a standin for entropy: time loves people, but they must die as energy+time inevitably causes entropy. But the love is with Miss Mass, who never shows up in any other form in the jaunt through history even as Golden Boy is omnipresent. And why is it an affair, with a jealous lover? Why the purchased watch, the implication of jealousy, the insinuation that Miss Mass is unhappy with Golden Boy, how is it possible to achieve a happy ending with.... whoever that character that shows up at the end is? So even a metaphorical read seems to fall apart on deeper examination.

In contrast, if the game wanted to explode into pure mysticism, it didn't go far enough for me.. A mystical interpretation might have implied a degree of interconnectedness between Golden Boy, largely forgotten by the end, and Miss Mass, never truly examined as a character (There's that misogyny again!).

Genesis Noir gave me a good time. It's an adventure game with an incredible style, and talking only about its metaphors and its music leaves out the slapstick comedy or the tight prose which genuinely caught me by surprise with its brutal efficiency. The structural flaws in Genesis Noir make it more interesting to talk about, even if what comes out is mostly criticism. And even the criticism is on a gradient. The misogyny of the "feminine hands" honestly stopped me in my tracks, and it makes me wonder about how well some things like the tribal mask and accent on the Hunter character were thought through, or the potential Orientalism of the Ronin storyline. Compared to the shock of those concerns, my difficulty following the cosmological metaphors is petty, but still an important part of how I experienced the game. Sometimes we can have beautiful experiences in unsavory places, and isn't that the most noir concept of all?