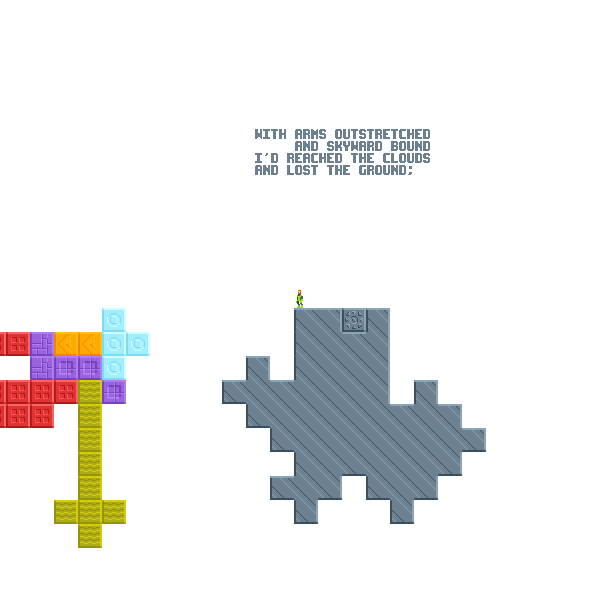 I gave Starseed Pilgrim several chances. So many people spoke with great respect about the exploration and beauty of the game that I went back again and again even after getting extremely frustrated. Normally I quit a game the second it stops respecting my time, but the vagueness with which people alluded to “spoilers” made me think I was honestly, genuinely missing something.

What I discovered on my own is that there isn’t really anything I would consider a “spoiler” about the game. Fifteen minutes of experimentation revealed: digging pink blocks gets you seeds. Seeds have different colors and behaviors. Plant seeds to make platforms. Black stuff comes from the bottom of the screen and from special blocks. You have to connect the special blocks to your platforms while avoiding the black stuff, but once you touch it you go into the negative space of your level—platforms become corridors and empty space becomes walls. The special blocks become keys. Collect keys, return home, and you’ll take any excess seeds with you, which you can grow to reach new levels.

The game makes gorgeous music. Each seed chimes with a specific noise as it grows, and the void forms dissonant chords as it encroaches. Unfortunately, almost everything else about the game served to frustrate me again and again. Although some seeds are much, much more useful than others, the seeds you get are random and you have no say in the order in which they are planted. This causes trouble with specific kinds of interactions, like how the seed-replenishing pink columns grow extremely slowly, while the void only slows for specific kinds of blocks. This random element makes it difficult to act tactically with your plants, so most ventures into a level will end in failure before you even find a special key-block.

Even if you do find a key-block, any number of things can cause you to mess up. Since special blocks spawn voids, the void generates twice as fast when special blocks are connected. You can accidentally touch the void before you’ve connected enough platforms, making it impossible to grab a key. You can fall off the screen before returning to the beginning of the level with your key in tow, wiping your accomplishment altogether, and if you get to a special block and get the key and make it safely to the bottom of the screen again, you might not have any seeds left over. Your entire adventure, while technically a success, will bring zero reward.

I really thought I was missing something. I tried searching the internet. Here is the official walkthrough for Starseed Pilgrim. I tried watching YouTube videos, which seemed to confirm my findings and didn’t reveal any hidden depth. I asked for help on Twitter and John Brindle was the only one who offered anything approaching human advice. At the end of the day, though, I wasn’t able to find the depth that spoke to so many others in this game.

Email ThisBlogThis!Share to TwitterShare to FacebookShare to Pinterest
Labels: design, indie, ragequit, THE PC IS DEAD