Prev: Securing the Homefort || Next: Misc

In order to ensure safety in our fort, we need to muck around with the military a bit more. Hit “m” to go back to the military screen, and then hit "e" for equipment, and shift-"W" for weapon

Hit the down arrow key to select "Individual choice", which will let the dwarf pick whatever they want, and press Enter to confirm your selection.

To do this for each dwarf, arrow-left, arrow-down + shift-"W" again.

When you’re done, hit Esc to exit out and hit "s" for the squads screen 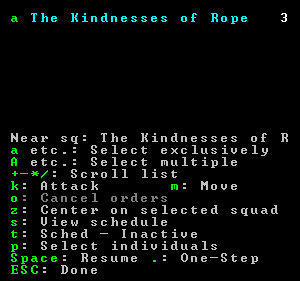 As you wish to order your squads around, each one gets a letter next to the name in the "s"quad screen. Your first squad is "a", the second is "b", and so on.

To order a squad, you need to select it first. Press "a" and then "t" to activate your squad. This changes your dwarves from reserve status to active, and now they'll follow their schedule. By default this means they'll train in a barracks. But this isn't quite enough for us, we want to station our troops at our entrance so thieves can't skulk in and steal our babies~!

Find your main entrance and hit shift-N from the main view to go into the Points view.

From here move your cursor to a specific point and press "p" to place a thing, and then "n" to name it something memorable and press Enter when you're done: 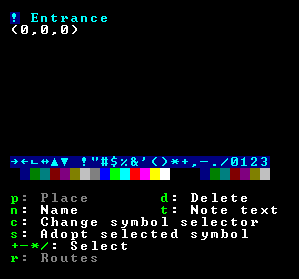 Now hit esc and "m" to go back to the military view, and "s" to go to the schedules view.

Ok, here we go. The months of the Dwarf year are on the left. Each squad has its own column from there. What I'm going to do is alter my schedule so there's always one patrol posted at the gates, while other squads are training. When squads train, they hang out in their assigned barracks and practice sparring with whatever weapon they have equipped, raising their skill with the weapon and armor they own.

First, I am going to alter the existing train order to allow a minimum of two dwarves posted at all times. This means dwarves are free to go eat and drink without passing out from hunger as long as there are two dwarves doing their thing.

Pressing "o" here cycles through the available orders in the top-left. Mine is on "Train", which is what I want. I'm going to hit "+" twice to alter the number of soldiers posted in the bottom left until it hits "2". Then I'll press SHIFT-enter to save my order.

Now I'm going to the right one column in the scheduling screen and tell The Ochre Bodices to station themselves at the Entrance point we designated, and two dwarves will be the minimum number posted. Again, press "o" to cycle through available orders until you find the one you find "station". Then you have to press "enter" to confirm the point, even if it's the only station on the list.
Shift-enter to exit.

Now here's the tricky bit. I can copy orders and paste them so I don't have to edit each set of orders by hand. First I'll copy my station order with "c" and move the cursor to columns and press "p" to paste:

You can see here that the order I copied has a "(C)" next to it indicating it's on my clipboard. Also, if you have more than three squads, you'll need to press "+" on this view to scroll it over. You can also try pressing shift+tab to swap the columns and rows if that's easier, in which case "+" switches the month.


Prev: Securing the Homefort || Next: Misc