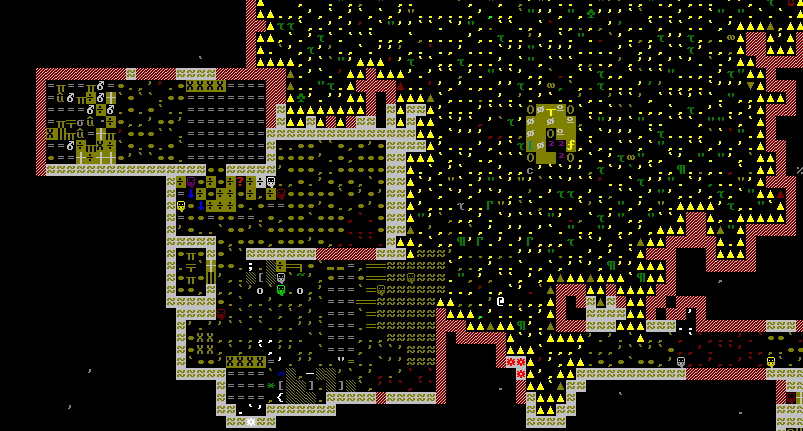 My fort is wide open. For three reasons. One, all those upward slopes mean anyone can come in from the hills above - so anyone can just wander down. Two - all that space outside is exposed to predatory birds (no joke! I lost my original architect to a giant parakeet). Three - if there were some mass incursion of wild animals or goblins or whatnot, they could rampage through my entire fort unchecked. I need a choke point to cut off enemies, but allow friendlies!

To make a secure fort, we need controlled access, filled with traps, and a militia armed with weapons.

First, let’s take care of that slopes problem. From the designations menu, “z” allows us to mark upward slopes and stairs for removal. So do that to any slopes that might lead into or near your base (but not so much that you cut off depot access!)

Once that’s done, seal off a 4-wide choke point by building a wall. It’s “C” (capital!) in the build menu. Then “w”, then use “u” to make a vertical wall or “k” to make a horizontal one. If any boulders (infinity signs) are in your way, designate a “s”mooth stone area on it and a dwarf with the stone working-> stone detailing skill will be on their way to remove the boulder. Walls need the Masonry skill to be completed. Enemies and dwarves can move diagonally, by the way. 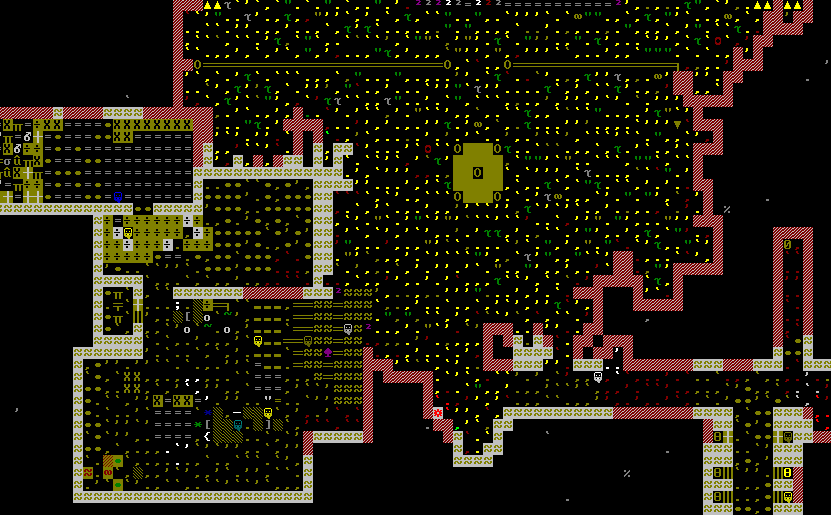 Okay, next up, let’s take a few of our perpetual slackers and enlist them. Hit “m” from the command list to go into the military screen and then "c" to create a new squad

A window will pop up asking for uniform type, which determines what weapons and armor the squad will automatically seek out and equip. For our first squad, select "no uniform" since it's unlikely you have any armor at all laying around at the moment!

Underneath the “SQUADS/LEADERS” heading is a randomly generated squad name. What we want to do is press right arrow to go to the first vacant squad position and then right arrow again to choose a dwarf for that position. Remember the name of a dwarf with no useful skills so you can pick someone who is expendable - squads need to be deployed to follow orders, and deployment pre-empts all other orders, including hauling and crafting items. A few of those worthless migrants are good candidates for enlistment. Once you press “enter” on a dwarf, you make them the squad leader (a dubious honor!) and your cursor jumps back to the next open position. Press “right” again to fill that position, and keep going until all your conscripts are in one squad. We need at least 2 squad members.

As you fill up each squad with dwarves, you'll need to go back to the "m"ilitary screen and press "l" to create more squads. Unfortunately this only works when your cursor is in the top-left position (which is the default position when you open the Military screen).


When you're done, “esc” out back to command view and make sure the game is unpaused so your dwarves can respond to their assignment. After you get messages about a dwarf becoming a commander, press “s” to view the squad order screen 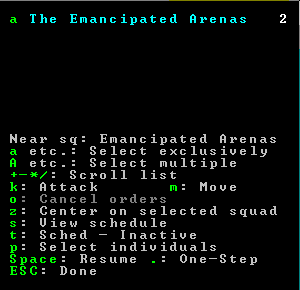 We want to hit “t” to schedule them as active. This means they stop doing their day jobs and become full time squaddies. Now we just need to give them the space to do it.

Mine out a large area and make some more beds. We’re going to build the beds in this large area, but instead of building bedrooms we are going to make a barracks. Dwarves on military duty without standing orders train, and they train in barracks locations.

Once the beds are installed, hit “q” and “r” to make a bedroom - then press “b” to create a barracks and “t” to indicate squads should train there. 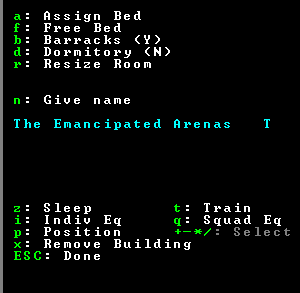 Since they don’t have weapons yet, they’ll practice wrestling. This will increase their skills as a wrestler. Next time a caravan comes back, you should have more than enough trade goods to buy out all their food and alcohol, and have plenty left for buying weapons and armor.

Now, when a baddie arrives, you can use “s”quads from the main command menu, press “a” to select your squad, and give orders to “k” - attack an enemy, or “m”ove to a location and stay there for defensive purposes. If you give an order, you can cancel it from the squads menu by pressing the letter of your squad name (“a” is for the first squad) and then “o” to cancel their orders.

Finally, let’s set up some traps at our chokepoint. Build a Mechanic’s workshop, and give a dwarf the Engineering -> Mechanics skill. Make a bunch of rock mechanisms. Once that’s done, “b”uild “T”raps. Let’s make a stonefall trap for now, since that’s the easiest - it’s just a rock with some mechanisms. When an enemy (NOT your own dwarves, or caravans) walks over the trap, it triggers, and drops a rock on their head. Place the trap at your chokepoint, and your mechanic will install it.

Other kinds of traps are built with weapons, spears, or cages to trap animals!

The “+”s are the top of the wall that I constructed - they count as solid ground. The “.” indicate there’s nothing on this level but empty space - however, below this level there’s a bunch of stuff. That’s why the “.” is colored. What I’m going to do is create floors on this level. The floors will prevent stuff from flying in above me. As a side effect, they’ll also prevent light from coming in from above. If you’ve noticed a lot of green puke on the ground - dwarves who haven’t seen the sun in a while tend to barf when they do see it. It’s not a bad idea to let a little light in here and there, so they mantain exposure.

Building a floor is a lot like building a wall. I’ll need a mason and lots of rock. I’m going to “b”uild and then hit “C” and then “f”. The thing about floors is they need to be connected to another piece of ground. If not, the Xs will be red:

You can see I am one space away from the nearest ground tile here.

Whereas here, I am touching two ground tiles (but I only need to be touching one).

Also, your dwarves will have to reach the floors in order to be able to construct them. You can’t use floor that hasn’t been constructed yet in order to plan new floors - you have to wait for construction to finish.